My mother Judy writes about her aunt and uncle: 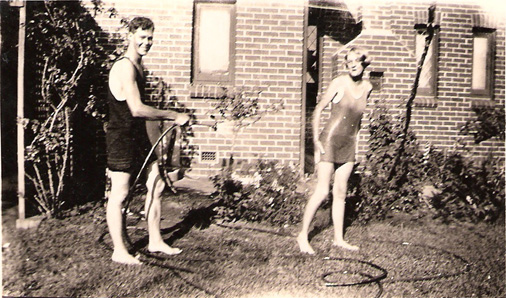 Madge Dean and Noel Kewish were both born on or about 1910. This is not Reba’s/Nana’s house, so [it’s] possibly [the] Dean’s [on] Embling Road, Malvern.

Noel looks about 18 — perhaps the family’d tried for a model [as] he was devastatingly handsome. Nana and Reba had a suitable life selected for him but Noel remained in contact with Robert James and continued taking him his medication after his partner died. Edna had it dispensed at Harry’s pharmacy [and] she would for many years.

Eventually, Noel found his own mate, Edna Duporth and married her. Shortly before their marriage Noel had a benign cyst and one testicle removed — they never had children and Noel became stout, then portly, then obese.

Madge and Harry were great mates. She was 19 when I was born, so was only 19 years older [than me] and I’d ride my bike to Grandma Dean’s flat when Madge was there and try on her clothes, playing dress-up. Madge worked at PLC in Sydney during the war teaching English and history. I missed Madge when she went, first, to Japan, then Malta, finally Nauru where she met Elmer ‘one enchanted evening’.

My mother Judy writes about a holiday house: 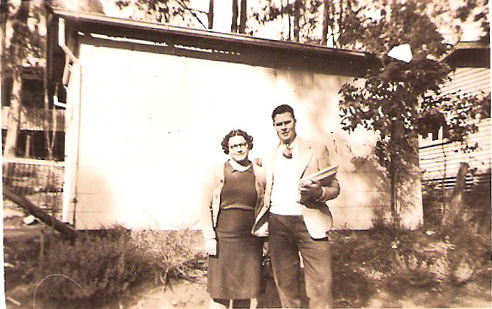 Harry’s apprentice, Jack Grainger, asked his parents to rent us this holiday house in Belgrave, then unsewered country, now probably all suburbia. Geoff and I usually took a couple of friends but basically we would set off after breakfast and return to Belgrave town for lunch at a restaurant (soup, roast and three veg, apple pie or cold compote and custard). This gave mum and dad a late nookie and no meal cooking for mum.

We would go to Sherbrooke Forest and watch the lyrebirds and platypi in the Sherbrooke Falls, cross the creek and return via the pine plantation, sometimes sliding down on the needles and climbing back up to the path that bisected the alternatively planted rows. Once we met a gang of the men who lopped the lower branches sitting around for morning tea, who asked whether I was a boy or a girl. I answered indignantly “A girl of course” (I wore jodhpurs, [a] red sweater, gumboots and a knitted Brownie’s cap).

We would descend into Belgrave and head for the restaurant ([it] only [had] one main street), we would lunch and take a slow stroll back to the house afterwards.

[There was] no radio, no tele[vision] of course; just books, pen and paper and crayons but [we] mostly collect[ed] botnical or insect specimens to ‘look up’, classify and mount after tea. Chestnuts cooked in the fire were exciting, they exploded as the shells split, then shot across the room.

As the houses were built above and below the road (these were the slopes of the Dandenongs), little tracks ran up or down to the house gates. Geoff and I played down one trench, along and up the next, much to the excitement of household dogs who terrified me, and I left Geoff behind in my terror to escape back to mum and dad still strolling along the road shoulder path. [I am] reminded of this because we recruited Noel and Ed to accompany us and played ‘hidies’ with them.