Educated at Scotch College and Melbourne University, where he graduates as a Master of Laws, Arthur enlists in 1915, serving with the A.I.F. in France from 1916 to 1919 as a lieutenant. Back home, with E. W. Gutteridge he co-writes the 7th batallion‘s unit history (Melbourne, 1933; reprinted by Abb-Typesetting, 1986).
17 July 2007 — received CD with the 7th Battalion unit history from supplier. Cost: $25. See bottom of page for scope.

He is admitted to the Bar in 1919. “At the Bar he gained an extensive practice on the Equity side becoming a leader in the field of Industrial Property in which he took, in later years, a prominent part in the reshaping of Australian statute law,” writes Mr Justice Stephen. He takes silk in 1944. He writes “a number of text books in wide use not only in Victoria but in the profession throughout Australia”.

“He loved the law and the life of the law and his many devoted friends both at the Bar and on the Bench found in him a wise and witty companion as well as a shrewd judge of men and affairs,” writes Justice Stephen.

A lieutenant colonel in the Reserve of Officers, he serves in the 3rd Division from 1939 to 1942. “He was a member of the 1942 court of inquiry into events that followed the Japanese invasions of New Britain, Timor and Ambon.” “Of the 582 [members of Gull Force, an infantry batallion of 8th Division assigned to protect Ambon, an island now part of the Indonesian archipelago] who remained on Ambon 405 died. They died of overwork, malnutrition, disease and one of the most brutal regimes among camps in which bashings were routine.”

He becomes a judge of the Supreme Court of Victoria in 1949, retiring from the bench in 1965. In 1960 he is knighted. He serves as chancellor of the University of Melbourne from 1954 to 1966. In 1968, “at the request of the Victorian Bar Council” according to Mr Justice Stephen, he publishes “the first definitive history” of the Victorian Bar, A Multitude of Counsellors. 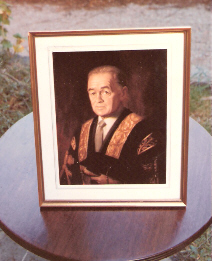