My mother Judy writes about her clothing habits as a teenager growing up in Melbourne in the 1940s: 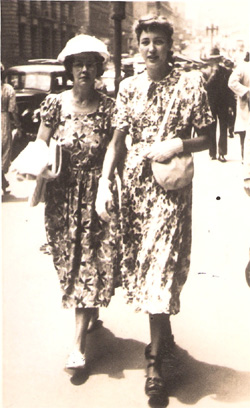 Perhaps I am turning into my mother — she was 5-foot 4.5-inches, about my present height. Mum made lots of our clothes, but ready-to-wear blossomed after the war (this was 1945).

Right through the 1940s and on we never went ‘casual’ into the city unlike today. Always stocking and shoes and gloves. When I worked I kept a spare pair of shoes and stockings in my desk or locker. Bea also added a hat and carried a ‘cardie’ (this one is white knitted cotton). We could only buy ‘dish wad’ cotton in those days, white unless you died it yourself.

The building across the street looks like the old GPO (now a shopping mall I hear).

My mother Judy writes about the washing days of her youth: 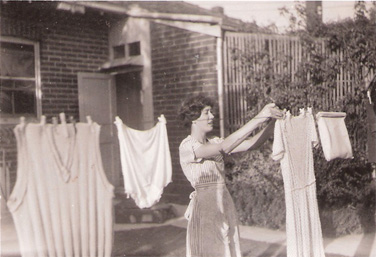 This was a ‘Domestic Goddess’ setup — I think Geoff took it. I reckon I’m 16. This is the back of house area at 280 Glen Eira Road. From left: kitchen window over sink, outer back door (the inner door can be glimpsed inside). There was a steps up of levels that I fell up roughly 30% of the time. To the right (inside back door) are the laundry, broom cupboard and second loo. To my left is ‘the fernery’.

This became neglected and full of tradescanthia, also a tree fern and some climbing roses. It also had a roof, which was accessed from the roof of the small woodshed, scaled from the side level. We then [got] onto the garage roof and walked across the deteriorating flat roof to the tiled house roof, which concealed [a] small V-step hollow over the front porch, where one could hide and sit for hours, reading or just watching the vehicle and pedestrian traffic.

Some of the tiles were moved or damaged with some indoor leaks developing, but neither mum or dad could climb up to inspect so we were safe. Just beyond the fernery was the garages, then a lean-to tool shed for briquettes and mallee roots which were the luxury fire fuel and much treasured. Other stuff was in the small shed next [to] the garage roof.

Next to this was the very clayey area dad dug, mattocked and hacked out an air-raid shelter, [that] brought on his first severe angina attack. This curtailed his physical activities and yet it was cancer (melanoma) rather than his heart that finished him off, some years later.

The washday ritual was unchanging — Mondays, the copper (wood fire) was lit, the troughs filled and clothes hefted with a copper stick into the first trough (grey water), mangled through to [the] second rinse (blue water), and back (without letting [the] clothes touch the grey water) and into the clothes basket.

My mother Judy writes about her youthful escapades: 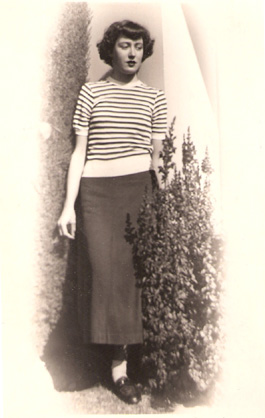 Three-eighty Glen Eira Road was on the corner of Anderson Street, which sloped down to the Bottom, ideal for billycarts and scooters. The facade to Glen Eira Road had an entry path with two pillars each side; mum plonked a cypress in each (it was de rigeur in those days).

This was the era of Joan Crawford ‘Bays’ [and] I could roll my front hair under to achieve this effect. The sides just curled anyway. I had just (or was about to) achieve maturity (I was very late). Note the longish skirt and classical french sweater; I also wore french berets and a trench coat, natural gabardine, a la Bogart.

I was going with a group called the Kumanka Social Club — all middle class lads from the Hawthorn-Balwyn line out of Melbourne — who had motorcycles. My pick (and steady for 2-3 years) was [a] blonde boy whose dad was an artist (Rem, for Rembrandt) McClintock. It was off Lex’s bike I fell when it skidded on tyres as we hit rain on a bridge over the Yarra at Richmond, en route to a Sunday performance with a moral at the Princess Theatre. Lex flew off but the bike pinnioned my left leg and dragged me in circles acorss the bridge. He remounted and attended the performance bur by the time I got home my knee was huge and black and yellow and I couldn’t walk for two weeks. Put me off motorcycles for years. Still have a few scraps of shrapnel in the left kneecap.

On my 15th birthday the boys took me to [a] hotel in Melbourne for dinner and presented me with a pair of pink scanties, with appliqueed (by them) blue ribbed letters: ‘KUMANKA’. I guess I should have tried them on then, but I was limp with innocence and touched by the handicraft.

We all came home and slept around the house at Glen Eira Road, and took off the next [morning] for Eltham, where many artists resided and Monsalvat was built. Whether a gang rape was intended I don’t know, but nothing happened except I tricked Lex into kissing me by having him play ‘Owl’s Eyes’ (don’t ask). 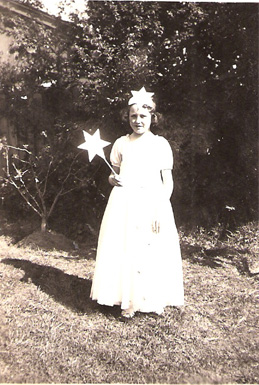 Taken at ‘Waverly’, a PLC ‘little’ school in Bambra Road, Caulfield, after the move to 280 Glen Eira Road. Every year there was a fancy dress party. This year I took Pauline McDonald, a neighbour at the Rosemount Avenue address. Mum lived to extremes — unusually, she generally made them — I definitely wanted the Irish peasant with the emerald satin head scarf. Mum got me into the despised fairy dress by saying “can you imagine Pauline as a fairy?” (Pauline was lanky, thin-faced and plain). 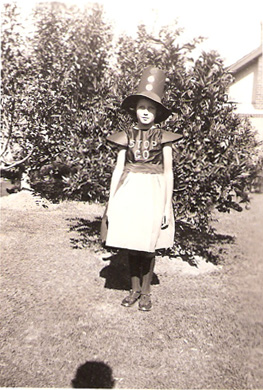 Aged 10, 1939. The outbreak of WWII. We had just moved to 280 Glen Eira Road on the corner of Anderson Street, in Caulfield. This year mum definitely made the costume: traffic lights! Geoff was a green satin frog. I think I won the girls’ [prize].

Waverly was attached to St Gile Pres[byterian] Church, the parish church, [and] the vicar was Asbey Swan, a silver-haired, handsome man whom all the ladies adored. His son was a bullying thing who had a fumble with all the little girls in the choir, so we closed ranks at his approach.

My mother Judy writes about the Rosemont Avenue house: 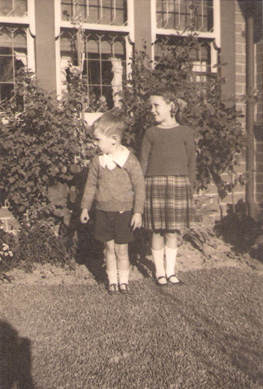 This was a big move, from the seaside to the higher altitude of Caulfield. This house, like the previous one, was rented. Rosemont Ave was T-ed into Baledown Road. The trams connected at the ‘Junction’ with the direct route to Nana’s house in Armidale/Malvern. The move was motivated by my sinus problems (too near the sea said Dr Curnell) and by the rough and tumble of Elwood State School where I was often ‘caned’ on the hands or legs for perceived impertinence when I answered a question or rebuke literally. Also with my blonde curls and blue eyes I attracted the more macho ruffian boys in older grades; one finally bashed me with a toy pistol [saying] “You’re my girl”. Whack! I sustained concussion.

We lived here until just before the outbreak of WWII when we bought a house in Glen Eira Road near the Caulfield Town Hall and a tram stop for the East Brighton No. 6 tram.

This is the flower bed (with standard rose[s] of course) outside the living room-‘lounge’. At the moment of clicking the camera we were distracted (probably by neighbour Cobblick’s cat), I think, and we both turned our heads.

I would catch the tram at the Junction stop, a block away along the road, and alight at Wattletree Road, Malvern, for PLC junior school; the same stop as Nana and Reba’s house. The school was housed in two buildings in the lane behind the Presbyterian Church in Wattletree Road. At lunchtime a teacher would send us to the other old house, which contained a wonderful library and rambling garden.

Because Bea never drove a car, we walked a good deal or used public transport. So by the time we were 10 we could get around the suburb fluently and into ‘Town’ with a sense of security. I never was that comfortable in Sydney surroundings.

My mother Judy writes about her early childhood: 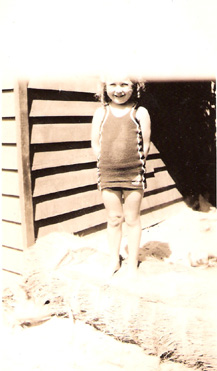 I may have been nearer four [years old] here. We lived in Sprong Street until I was five and a half, when we moved to Rosemont Ave, Caulfield, near Caulfield Park at Balaclava Junction.

The sandpit had to be sieved daily as the local cats used it as kitty litter. When Geoff was able to sit up and totter he was put in the pit with me, where occasionally I tried to bury him in the excavation for the housing development we built in the sand.

Shortly after Geoff was born, I had my tonsils out at the hospital where we were on the corner of Tennyson, Byron and Shelley Streets (or similar) known as Poet’s Corner, also near dad’s shop. Afterwards mum wheeled me home, still splattered with blood, on the little seat slung across Geoff’s legs in his pram. It was a grey, wild, showery day and I can still see mum struggling with the pram in the wind. It was quite a distance to Sprong Street.

Swimsuits in the early 30s were scratchy wool, frequently hand-knitted by mum, Nana or one of the invaluable aunts. They stayed very wet but “wool is still warm when wet”. They also stretched when wet. This one is red.

My mother Judy writes about her third birthday: 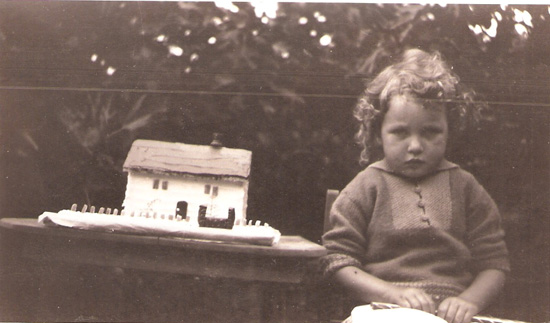 When the Kewish family came to Melbourne from Leongatha in 1920 Beatrice found a job at Melbourne University, at the lab which conducted tests for V.D. and other sexually transmitted diseases. Her boss was Dora Grant, who became a long-time friend. Because of handling the specimens, Dora would, when reading test results for Bea to check on [a] list, occasionally show in Bea’s numbers as ‘positive’. (Dora had a loft apartment close to Elwood Beach, which we used for years, even into our teens. Entry was up an outside sete of steps and a long window. We could use her shower, tea and, later, beer.)

Because Geoff was due on October 29th, Bea was distracted and very fat. I gathered we were to have another baby [and I thought] “Why did we need one when they had me?” and [I] was obviously cheesed. Dora arrived with this wonderful cottage cake, [that] she had made herself, for my birthday; being photographed all I could raise was a scowl.

The hair on my left side was much shorter than the right — I used to suck my right thumb and twist my left index finger in my hair, droning “golly, golly, golly”. Bea was frequently driven to cutting my finger free.

I can also remember Geoff’s christening a month or so later. Brown was in in ’32 [and] I gazed up at a circle of tall ladies in shades of brown wearing the tight cloche hats of the period, on fringed, bobbed hair.