‘The Kalamazet Binder’, an article of stationery that was once supplied commercially by Kalamazoo (Aust.) Ltd., is a disintegrating maroon item, a once-sturdy album that has survived the years. It was given to me in February 2007. It is my grandfather’s scrapbook. It is interesting. 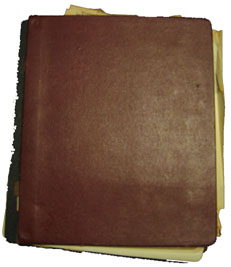 How Harry became a Communist

Although he died in 1954 and I never met him, I find it easy to understand Harry Dean. My mother once told me that when Russia allied itself with Britain in 1941 Harry changed alegiances: from serving as an Elder of the Presbyterian church he adopted Communist ideology.

But it seems that Russia’s move to side with the Allies was not the decisive factor that initially brought Harry round hard to the Left. He was clearly there from the 1930s, and would say that “Socialism was living Christianity”. More evidence is absent as he donated his extensive library to the Party when he knew he was really ill with the cancer that would kill him, so all that is left to us of the thousands of books he owned are a few remnants given to me by family members.

My mother adored him. “If he said something was right, it was right,” she says. His brother Arthur didn’t think so and, says one of Arthur’s children, Harry’s involvement with the Communist Party caused friction in the family. Anything approaching Communism was viewed with great suspicion in the 30s and 40s and 50s. Harry’s older brother Arthur had spent four years in the trenches in France fighting ‘for King and country’.

What did Harry clip?

My feelings are sensible on opening Harry’s album. Inside the front cover is a clipping Bea, his wife, took from The Herald, a Melbourne broadsheet, on Monday 25 November 1963.

“Assassin Shot Dead on His Way to Gaol,” shouts the headline flung across the top of the page, displacing the masthead. The news is about Lee Harvey Oswald and the story continues on pages 3, 4, 5, and 6. Bea didn’t clip the story of Jack Kennedy’s killing.

There are a couple of blank pages at the beginning and then on page two are three items by David Martin, a man who worked “as a freelance journalist and editor of The Australian Jewish News. He quickly became part of Australian literary and political life. He joined the Communist Party in 1951, was active until 1956 and remained a member until 1959”, according to the National Library of Australia’s Web site.

Most of the clippings are undated. But they are carefully clipped, neatly edged, and glued carefully in place. On page four the date 12 October 1953 is written in green ink on a clipping that features a poem, ‘Mao’s Gift’. “This poem of the Peking Peace Conference is by West Australian poet Victor Williams, who has been invited to the USSR by the Soviet Writers’ Union.” According to the Web site of The Guardian, the “weekly newspaper of the Communist Party of Australia”, Williams turned 90 in 2004.

The album is the product of the labour of a passionate man. Many of the poems are mere doggerel, but there’s no doubting the enthusiasm of the person who selected, clipped, and pasted each one into his scrapbook. My mother, who adored her father, told me the clippings are from The Tribune, a Communist Party newspaper.

More important to Harry than the quality of the verse is the message it purveys. Nabokov, a favourite writer of mine, could not have used such a system to select verse for inclusion in a scrapbook.

In a 1964 interview conducted by Alvin Toffler for the January issue of American Playboy, Nabokov made one of many similar assertions about the meaning of art when he said: “A work of art has no importance whatever to society. It is only important to the individual, and only the individual reader is important to me.” (Strong Opinions, Vintage, New York, 1990, p. 33.)

In The New York Times Book Review of 9 January 1972 Nabokov replied to questions written by Israel Shenker (Nabokov only ever gave answers to written questions, submitted in advance): “I think like a genius, I write like a distinguished author, and I speak like a child.” op cit, p. xv.

Shenker: What kinds of power do you favour, and which do you oppose?

Nabokov: To play safe, I prefer to accept only one type of power: the power of art over trash, the triumph of magic over the brute.

Shenker: What are the large issues that you can’t get interested in, and what are you most concerned with?

Nabokov: The larger the issue the less it interests me. Some of my best concerns and microscopic patches of color. (Op cit, p. 182.) 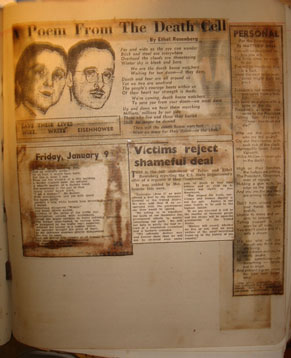 Harry would not have agreed. The man who bought Edgar Lee Masters’ Spoon River Anthology in 1926 would, in 1953, vote with his time for the faction that says art must serve a higher cause.

‘The men who made Australia’ by Henry Lawson, is the first clipping in the album, and it is captioned by the newspaper editor: “It is fitting that in Australia Day week we should publish this poem by Henry Lawson which has been omitted from modern collections of his works. It was written on the occasion of the Royal Visit to Australia in 1901.”

The page (22) of the album shown at left holds clippings that deal with the Rosenbergs, tried for espionage in 1951. There are more on subsequent pages.